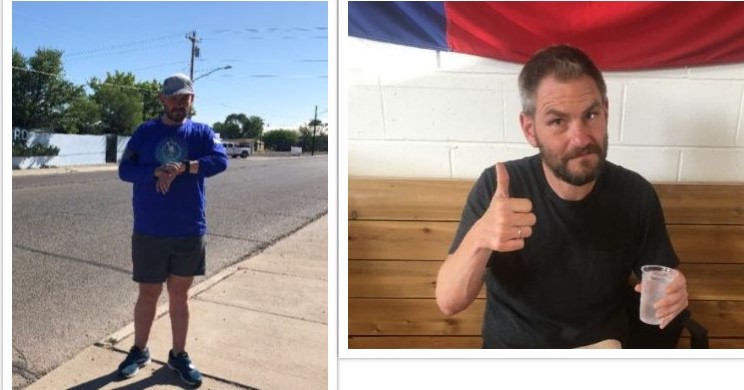 How Changing What You Eat Changes Your Marathon Time

After getting a few marathons under our belts, my partner, Devon, and I realized that one of the biggest things holding us back from getting to a ‘respectable’ marathon time (sub-4.00) was our nutrition.

So, based on the recommendation of our favourite running podcast, Run Run Live, we messaged Rachel Shuck in December 2018, and started working with her, New Year’s Day, 2019!

As someone who used to weigh almost 300 lbs, there is one thing that I am well aware of – it does not matter how much you exercise, you cannot outrun a bad diet. The first thing that Rachel had us do was to keep track of our eating (and drinking), whether ‘good’ or ‘bad’. Devon and I came down with a pretty awful illness on New Year’s Eve, so the first week was full of the clean, healthy eating that nutritionists love to see. I did have a feeling that perhaps Rachel didn’t exactly believe our diaries, though later on after we recovered and started back with the occasional beer and/or pizza, it helped prove the veracity of our start.

After getting our first week of data, the real work began. I was ranging between 220-225 lbs at the time, and knew that at my age, I couldn’t get much faster without losing weight. Rachel takes the proper view that weight loss needs to happen with lasting change, so gave us changes that were easy to understand, easy to implement and easy to commit to long term.

The overall theme of the changes is to provide the fuel we need to pursue our running goals. More whole foods that help us have better workouts, and food to help us recover from those workouts. We work full time and run five days a week, and one of the biggest differences is that we cook a lot more, but the food we make doesn’t take a lot more time than ordering in. And, when we do order in, we make much better choices.

The first test was a 30 km race in Hamilton, Ontario, in March. It’s a traditional kick off to the running season, and it’s a good test of your winter training (and diet), because the weather is typically awful, and the back half of the course is extremely hilly. This year featured a head wind for most of the second half, but I still bettered my time by almost five minutes.

The second, bigger, test, came with our first marathon of the season, in May. We didn’t quite manage to break the 4.00 mark (according to my Garmin I did, but course timing doesn’t lie), but I knocked an incredible 33 minutes off of my course time. That I was back running two days later tells me that I could have gone faster. Perhaps it’s the mental part I need to work on next!

Seriously, though, I ran the race at just under 210 pounds, but was heavier for most of my training, so I didn’t get the experience running faster for long periods of time.

Because I travel a lot for work, or in situations where I don’t have a lot of control over the food that I’m being served, I decided to move to a plant-based diet just before summer. As soon as I tell people that I’m vegan I get to choose whatever I want to eat! Yeah, I’m that guy. It’s a lot easier to say no to eating a large pizza when it’s a food you can no longer eat, whether just for dietary reasons, or something greater.

Rachel has been really supportive, preparing meal plans and more importantly, making sure that I’m continuing to get the nutrition I need. There are a lot of check-ins and quick notes via Myfitnesspal to make sure I’m eating a healthy plant-based diet, instead of fries and oil-filled fake meats at every meal. Correspondingly, I’m at the lowest weight that I’ve been at since 2013, and feel amazing.

We are in the process of training for the Berlin marathon in late September, and although we are in the middle of the summer heat, training has been going amazingly well. One of the benefits of getting your nutrition right is you feel amazing almost all of the time. You look forward to workouts and you have the energy and enthusiasm to power through them. Just today I had a threshold workout as part of my speed training, and had so much fun that I threw another mile or so on just to do it.

Working with Rachel has given me control over my eating and nutrition and the confidence to set my running goals high. Berlin was going to be just a fun race in a great city, but I see it now as a tune-up for my first attempt to BQ.